What Great Leaders Do in Disruptive Times

We’ve moved past the industrial age to the information age, where data, blockchain, and quantum computers may prove to be the great disruptors in every economy, sector, segment, and industry. Understanding the basics of these technologies can help leaders address fears and engage all stakeholders in the development of strategies and tactics for sustainable technologies and disruptive innovations. 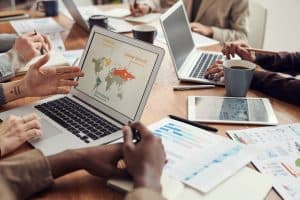 When this topic comes up in the organizations where I consult, we examine assumptions. What do you know about disruptive innovation? What do your employees know? Here are just a few topics to consider:

Data: Facebook, Google and Twitter now collect 5.6 billion bits of data per day. And in just the first three weeks of February 2020, HBR published 11 articles on the subject of data. How are you using data? Do your employees understand how their data is being collected and used?

Blockchain: A growing list of records (blocks) that are linked using cryptography. Each block contains a cryptographic hash of the previous block, a timestamp, and transaction data. The data in any given block cannot be altered retroactively without alteration of all subsequent blocks, which requires consensus of the network majority. Reuters has created a great graphic of this process.

Quantum computers: A handful of companies have introduced prototype quantum computers. The fundamental component is the quantum bit, or qubit, which can have a value of 0 or 1 at the same time. This allows quantum computers to consider and evaluate many outcomes simultaneously, thereby increasing their calculating power exponentially.

Mission, Values, and a Triple-Bottom Line

When was the last time that you reviewed your mission, values, and understanding of a Triple-Bottom Line?

Twenty-five years ago, John Elkington coined the phrase “Triple Bottom Line.” In 2018, he pointed out the misuse as an accounting framework, where profit remains center stage. In the HBR article Elkington explains, “The TBL wasn’t designed to be just an accounting tool. It was supposed to provoke deeper thinking about capitalism and its future, but many early adopters understood the concept as a balancing act, adopting a trade-off mentality.” The goal of the triple bottom line was to transform a system change; a disruptor to unsustainable sectors and a genetic code for next-generation market solutions.

The Triple-Bottom Line and Disruption

When the concept of the triple-bottom line was introduced, stakeholders included all people: from stock-holders, to employees, to consumers.

Rather than re-distribute wealth, could we pre-distribute it? Could we democratize the way that wealth gets created in the first place? These are just two of the questions Don Tapscott posed in a TEDTalk:

“Technology doesn’t create prosperity, people do. But here’s where technology has escaped out of the genie bottle. It’s giving us another opportunity to rewrite the economic power grid and the old order of things, and to solve some of the world’s most difficult problems, if we will it.”